Update July, 2021: The title of this page has a specific meaning in the context of the dimensional shift that is underway for humanity and Mother Earth. When the New Earth was fully anchored energetically in 2012, in hindsight now, it seems that the most intense geophysical aspects of Mother Earth's dimensional shift were completed. Evidence of this can be seen in the decline in the frequency of major earthquakes since 2012 evident in the graph below. Humanity is not moving through its collective dimensional shift as readily as Mother Earth and now we are faced with dealing our human-created catastrophic ecosytem and climate-related changes. 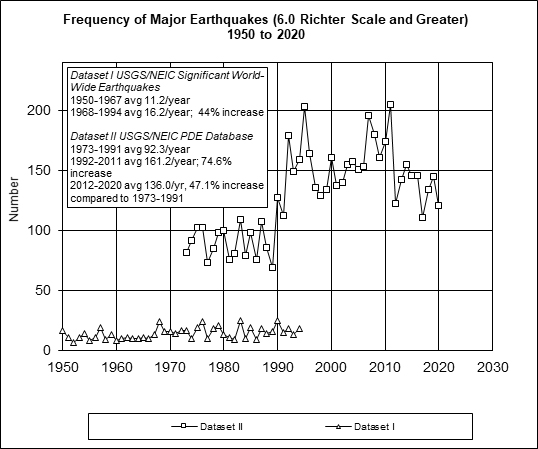 New May 8, 2006/updated February 2009: Evidence for decrease in Yellowstone earthquake activity as a result of an Earth energy healing ceremony.

New January 18, 2006: What do I mean by catatstrophic Earth changes? Review my proposed quantitative criteria for a catatstrophic event: Quantifying Catastrophe. See, also review of geophysical events in 2005 in Great Shift/Earth Changes Newsletter #3

Collectively, human consciousness has reached a level that allows us to shift the location and/or reduce the magnitude or intensity of geophysical events (earthquakes, volcanoes, tornadoes, hurricanes, geomagnetic storms) so as to reduce harm to humans.

The second item explains, in part at least, why the catastrophic Earth changes prophesied by indigenous peoples and various religious traditions have not come to pass, and are unlikely to occur in the coming years. I should clarify here what I mean by "no catastrophic earth changes." In the early 1990s my work as an environmental scientist led me to conclude that humanity had passed the point of no return in the damage we had done to planet Earth and that a great dying of humans, on the order of billions of people, was inevitable. Thus, my operational definition of catastrophic earth changes includes events that cause hundreds of millions to billions of people to die. There are still possible timelines that would result in deaths of this order of magnitude, but I prefer to focus my energy and encourage others to focus their energies on creating a timeline where this does not occur. The evidence presented here suggests that we've done a good job so far.

Neverthless, with more than 7.8 billion people alive today, and the intensity of geophysical and environmental stresses being experienced by Mother Earth, additional events, such as the tsunami in Indonesia in December of 2004, are possible which could cause death tolls on the order of hundreds of thousands to millions. When faced with tragedies of this magnitude, it helps to remember that death is a wonderful transition akin to birth, and that the souls of those who have passed on are safe and being well cared for. Such tragedies provide us with the opportunity to offer love, care and assistance to the survivors.

The Table below, taken from Chapter 5 of the Great Shift manuscript (never completed for publication), summarizes the results for the seventeen hypotheses that I developed. Only one of these hypotheses (increase in the Schumann resonance) was not supported by the data I analyzed. In the chapter text (and footnotes to the table) I am careful to identify hypotheses where other explanatory factors are available and where the data are consistent with mainstream science's understanding of the phenomena. However, as far as I can tell, five of the geophysical trends have no explanation within the current scientific understanding of earth processes:

Increased frequency of destructive earthquakes (intensity of VIII and greater on the Mercalli scale and magnitude of greater than 6.1 on the Richter scale).

Downward trend in average magnitude of destructive earthquakes. (Note, June, 2012: I have note been able to update this dataset, but since I posted the graph below, this trend does not appear to have continued).

1. Trends are not predicted by mainstream science.
2. Other explanatory factors are involved (i.e. better warning and emergency response infrastructure to reduce deaths, sturdier building construction, etc.).
3. Hypothesis not confirmed for period 1950 to 1996, but recent mainstream science modeling suggests that it will be true in the future.
4. Data trends are also consistent with mainstream science's understanding of Earth magnetic field changes and SPE cycles.

One of the greatest ecological catastrophes in Earth history happened billions of years ago when free oxygen became a significant gas in the atmosphere. Up until that time Earth was inhabited by myriads of bacteria which found oxygen to be lethally toxic. The consequence of this shift in the composition of the Earth's atmosphere was a great dying of methanogenic, nitrate-reducing, sulfate-reducing, and other bacteria whose survival depended on the absence of oxygen. Their loss was our gain and the amazing diversity of life that we see on planet Earth is fueled by the added energy that oxygen metabolism adds to living systems.

In order to classify an event as catastrophic some baseline needs to be established. A central thesis of this book is that a great dying of billions of humans is no longer inevitable, and better yet, unlikely. However, below I identify a number of events that could result in such a catastrophic dying. Here I suggest some ways to quantify catastrophe and differentiate it from the natural and human-caused disasters which are a "normal" part of human experience. I will use two types of human death statistics as possible indicators for defining a catastrophic event (calculations based on world population of 6.5 billion in early 2006):

(1) Single event death total > 0.9% world population = 60 million. I acknowledge that this would be an extreme event, and would effectively double the number of human deaths in a year (in 2002 deaths from all causes totaled about 57 million, or about 0.9% of the population in that year--Worldwatch Institute, 2005:49). Percentage-wise this is not as extreme as the influenza pandemic of 1918 which killed an estimated 20 to 40 million (1.2 to 2.4 percent of the world's population--Worldwatch Institute, 2005:43). In 1992 the HBD Kryon, was asked the question: Will it be necessary for large numbers of humankind to be terminated in order to achieve balance? He responded: "The answer is yes. The numbers, however, only approaches one percent of the life force here" (Kryon I, 1993:97). That percentage worked out to 55 million at the time, somewhat less than the number I have proposed. However, as I note below, other higher dimensional sources suggest the possibility of a much higher number.

(2) Cumulative deaths (1992-2012)>30 percent = 2.0 billion. I have chosen the cumulative numbers to apply to the time period from the end of the Armageddon bypass (Section 7.6.2) to the year that many predict something spectacular will happen (and which I say "something interesting might happen-Section 7.7). I have set the cumulative threshold at a percentage that is near, but less than the percentages for disastrous famines, and disease epidemics in recorded history. The bubonic plague in Europe (1346-1349) and the 1770 famine in India killed up to one-third of the population and smallpox epidemics in China (161-162 and 310-312) are estimated to have killed up to 40 percent of the population (Cook, 1981). The most catastrophic dying of humans over a more extended period affected the indigenous peoples of the western hemisphere where more than 90 percent of the population (90 million from 1492 to 1600; Wright, 1992). This is the kind of percentage that would likely have died under the pre-1987 timeline.

I am committed to creating a reality in which no single event in the next ten years or so exceeds the first criterion (>60 million deaths). I believe that we have the capacity to keep the actual number far below this. The second criterion, which relates to cumulative deaths from disastrous events, implies multiple events that would exceed the 60 million-death threshold. As I said, I am committed to creating a reality where nothing approaching this super-catastrophic threshold occurs. However a variety of channels have suggested that the number of deaths between now and the not-to-distant future could be as high as 30 to 40 percent, or 2.0 to 2.6 billion (Valerie Donner, The New Ground Crew, email communication dated December 1, 2005). This range is within the percentages of disastrous historical events, but I would take no satisfaction in seeing cumulative deaths in the coming years coming anywhere near close to this range.