Update: In late December of 2008 a large earthquake swarm about 900 as of January 9 generated a lot of excitement in the internet catastrophist community. The Yellowstone Volcano Observatory website has reported it as a *routine* periodic swarm: http://volcanoes.usgs.gov/yvo/publications/2009/09swarm.php. The largest recorded swarm occured in the fall of 1985 when more than 3000 quakes were recorded in a 3-month period: http://volcanoes.usgs.gov/yvo/publications/2004/apr04swarm.php. More time is required to assess the significance of the latest swarm and complete data through to the end of 2008 are not available from the Yellowstone Observatory yet. However, I have updated the earlier graphs graphs through 2007. Since May 2004 earthquake activity has continued well below the historical average before the Grand Tetons Blessing Ceremony. 2008 was more in line with historical activity. It will be interesting to see what 2009 brings. 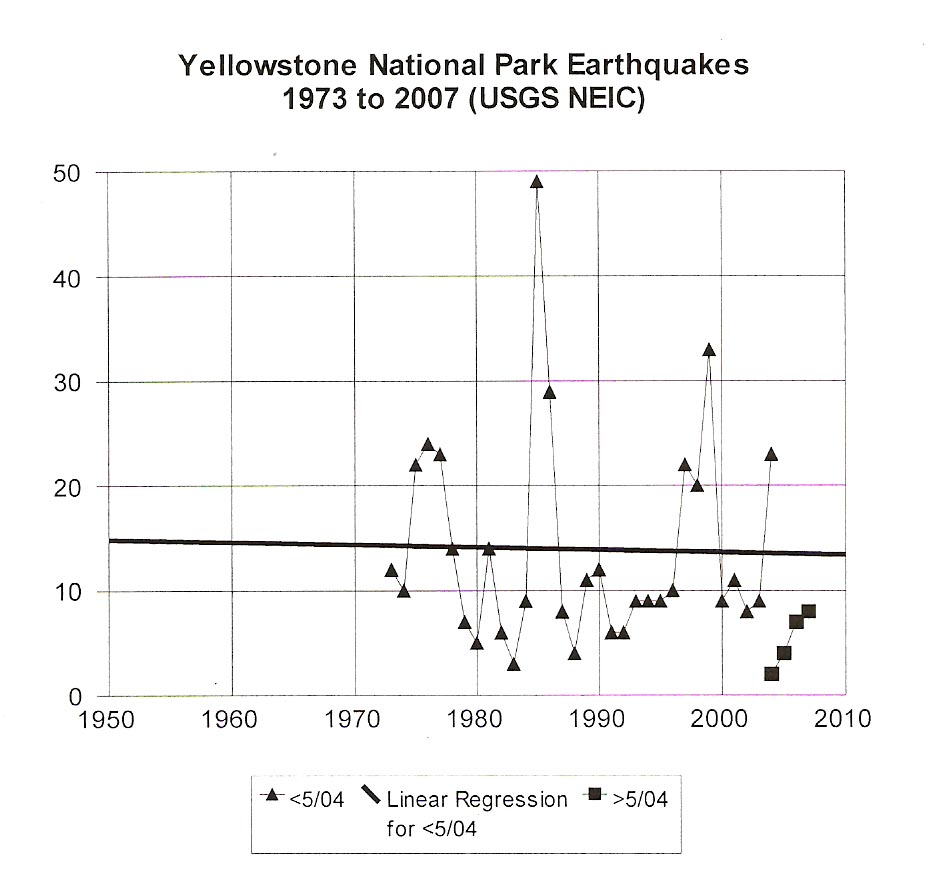 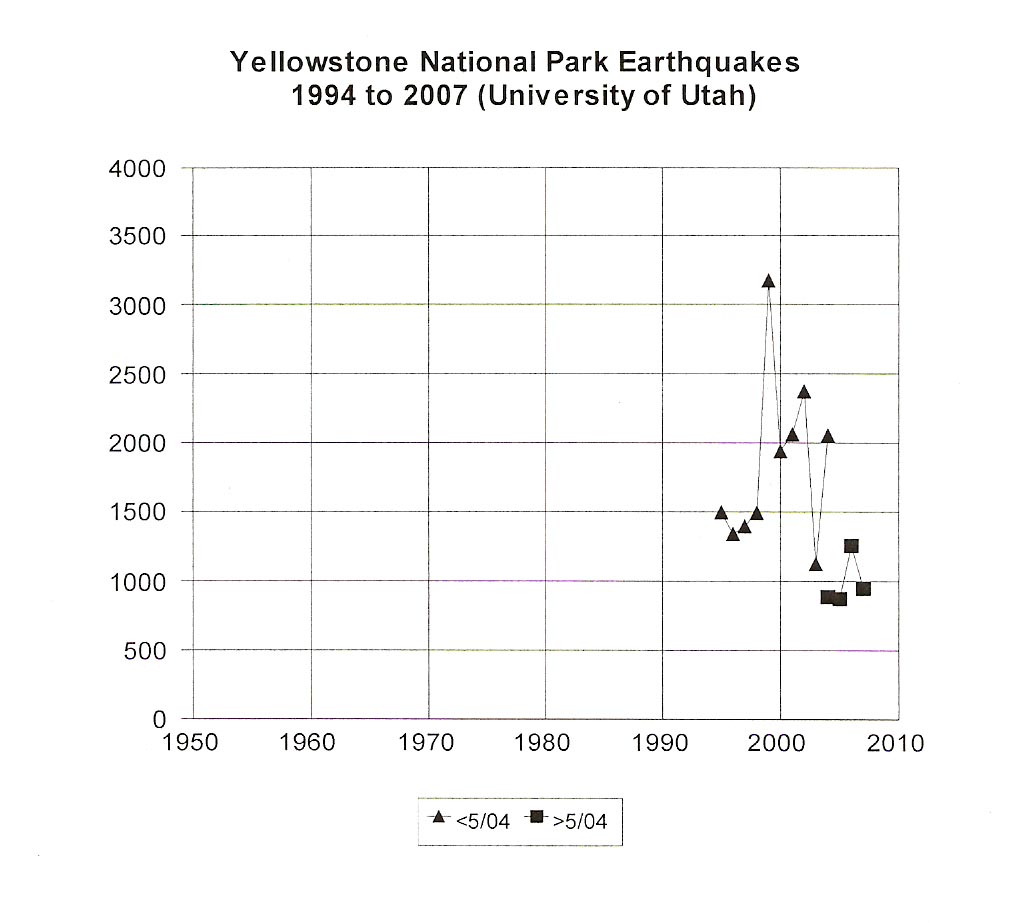 In my May 2006 Earth Energy Healing Newsletter I described a personal energetic healing experience that was related to volcanic/tectonic stresses in the vicinity of Yellowstone National Park. It was only after that experience that it came to me that there was some connection with this experience and ceremonies that were conducted May 8, 2004 at 19 sacred sites in a radius of about 600 miles around the Grand Tetons in Wyoming to activate a huge Medicine Wheel for the healing of Mother Earth's mountains and waters. One of the purposes of the 19 +1 = 20 Grand Tetons Blessing Ceremony was to relieve geophysical stresses in the Yellowstone region north of the Tetons. I learned in a phone conversation with Bennie Blue Thunder Le Beau, an Elder spiritual leader of the Shoshone nation and organizer of the event, that information presented at a meeting for Native American tribes in the area indicated that earthquake activity in the Yellowstone area had significantly decreased after the May 8 ceremony. Naturally, this peaked my curiosity, so I decided to analyze what data I could find myself to see if I could confirm this. Below I present what I found. It is only when I started writing this up that I realized that I am doing this on the exact two-year anniversary of the event.

Hypothesis: An effect of the May 8, 2004 19 + 1 = 20 Grand Tetons Blessing Ceremony will be a decrease in earthquake activity in the area of Yellowstone National Park.

There are many rumors flying around the internet that Yellowstone is set for a catastrophic eruption. An increase in seismic activity typically precedes eruptive activity, so this hypothesis is very relevant to my general thesis that human consciousness has reached a stage where geophysical stresses can be released in a way so as to minimize harm. The Yellowstone region has produced three catastrophic caldera-forming eruptions in the past two million years, with two of them amongst the largest eruptions known to have occurred on Earth. The last catastrophic eruption occurred 600,000 years ago and the last significant eruption occurred around 70,000 years ago: http://vulcan.wr.usgs.gov/Volcanoes/Yellowstone/description_yellowstone.html.

The next place I went for data was University of Utah Seismograph Stations database. Comprehensive data on earthquake activity in the Yellowstone National Park region is available from this website going back to 1995. A cursory look at these data shows that the PDE databse at best includes only about ten percent of the actual number of earthquakes in the region, which has a five-year moving average of around 2000/year. Nevertheless, I used the same method for assessing the effect of the May 8 ceremony. For the year 2004 I calculated two numbers, first the number that would be expected if the number of earthquakes from January 1 to May 8 continued at the same rate (1910) and second the number that would have been expected for the entire year, based on the number of earthquakes from May 9 to December 31 (886). The decrease was also evident in 2005 (872 earthquakes) and, if earthquake activity through April 30, 2006 continues at the same rate, the projected number for 2006 is 1227.

Again, the hypothesis is confirmed, with the number of earthquakes since the May 8, 2004 ceremony about half the number of the five-year moving average for the previous five years. At least another two or three years worth of data will be required to add any statistical certainty that a downward shift has occured, but the fact that two different datasets show the same pattern increases my confidence that this has happened.

Back to Top
Return to Earth Changes Page